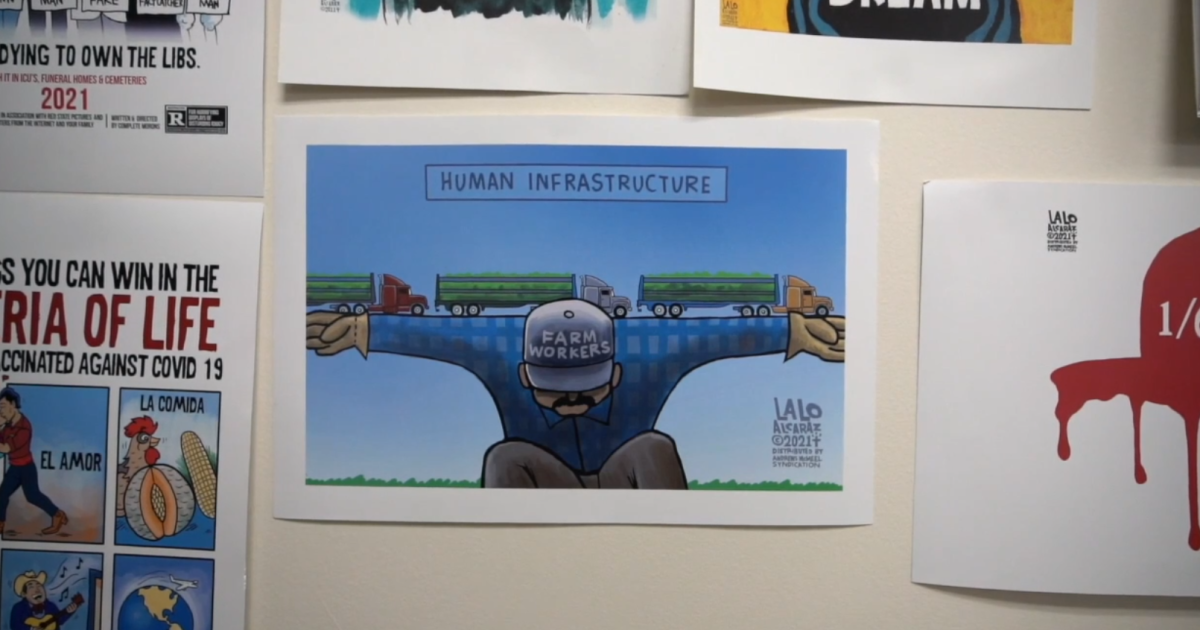 A cartoonist fights misinformation in the Latino community

LAS VEGAS (KTNV) — We have never had more access to information than we do today. But we’ve probably all seen someone post something that isn’t true. Identifying misinformation and stopping it can be difficult.

“Do you always get excited when you see people react to something you create?” Chris asks. “Oh yes… like it never gets old,” says political cartoonist, Lalo Alcaraz.

This little office where Lalo brought me is where he sends a strong message.

“I just try to get people to think critically,” Lalo says.

“I think political cartoons are a really accessible, fast-paced format that delivers the truth with a punch,” Lalo says.

The problem with political cartoons, he told me, is that within seconds you should get the point.

“Yours don’t really beat around the bush,” says Chris. “The candor is what makes my cartoons different… My first hate mail was actually literally US snail mail, then it turned into emails, then into social media posts,” Lalo explains.

For many of you, Lalo may need no introduction.

“I cut them… newsprint man before he disappears,” says Lalo.

“The strip is about a group of friends, it’s basically me and my friends when we were 25 when we got out of college… It’s just us living the life and living the politics of the day,” says Lalo.

In the pandemic, his work has taken on new meaning.

“It makes me feel good if someone tells me how that really helped me talk to my uncle about his aversion to vaccines or you know that’s always a win for me,” Lalo says.

These are the special cartoons Lalo has created to combat pandemic misinformation as part of a project with the State of Arizona called “COVID Latino.”

“I inserted myself as the Arizona sun devil logo dude and changed his pitchfork to a giant syringe presumably with the vaccine and chased a little coronavirus dude,” Lalo explains.

The Latino community’s heavy reliance on social media for information is one reason why groups like Nielsen say they are at a higher risk of misinformation.

And because Lalo hosted a special for this story, the nonprofit Avaaz, which studies misinformation…found posts containing misinformation in Spanish on Facebook are much less likely to be reported than publications in English.

“I think we are all responsible to our communities, we can’t expect people to come and fix things for us and also on the pitch at some point,” Lalo says.

Facebook has promised to do more to verify Spanish posts on its platform. But as we inch closer to the midterm elections, Lalos’ message, both in cartoon and in voice, needs to be educated.

“You know the information is out there, you have to look at it. Use the coco that God gave you ‘It’s an old thing my mom used to say,'” Lalo says.

A Century of Fritzi Ritz The Daily Cartoonist