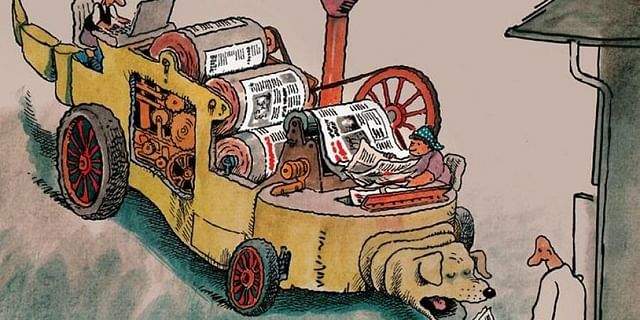 Austrian cartoonist Klaus Pitter, who designs comics for children, exhibited his work at the Indian

Children’s cartoons have always been witty, with fun colors, and something that will stay in their minds for a while. Klaus Pitter’s work is full of them. The work of this Austrian designer not only touched the hearts of many children, but also touched adults. His work is currently on display at the Indian Institute of Cartoonists.

While many have a clear idea of â€‹â€‹the difference between illustrations for children and adults, Pitter thinks there shouldn’t be that much of a difference. â€œChildren today are mature enough to understand the designs that are produced for older audiences. On the other hand, I’m not a fan of the loud, hectic style that you see in many cartoons. I don’t think they have any good influence on the kids, â€Pitter says. According to him, you have to be very careful with children’s comics because it is not a good idea to give “the impression that everything is possible in no time as you find in many children’s shows”.

Born in a village in Upper Austria, Pitter loved to draw since he was a child. However, he only developed this interest around the age of 15. Apart from magazines, he has illustrated and designed books for young people on environmental protection and a series of textbooks. Speaking about his process on how to approach an idea, he says, “Sometimes I have a rough idea of â€‹â€‹how the story might continue or end, but there is always room for turns. unexpected. But now I mainly work on comics based on literary material. A friend of mine is doing the rhymes and I will do the drawing. The idea is also to put the stories on stage – with actors, music and video projections. With that, we could spark the interest of the audience who are much more accustomed to animated stories and the digital world than we have ever been, â€he explains.

Having practiced the profession his entire life, Pitter is quite candid about how lucrative this career could be. â€œIf you work as a freelance artist, your income fluctuatesâ€¦ there will be good days, like when someone frequently publishes your work, and then there can be difficult days as well. It is better to work in various graphic sectors, so as not to depend on one, â€explains the 74-year-old designer.

Although Pitter’s works have been exhibited across Europe, this is the first time they have come to India. Nevertheless, he is also well acquainted with and fond of the works of Indian artists. â€œI know Indian artists from Instagram and Facebook, like RK Laxmann. Mario Miranda, Kishor Shitole and Cheepuru Kiran Kumar. Personally, I know Shankar Pamarthy. We met at a cartoon festival in Tehran, Iran. His caricature portraits are very imaginative and masterfully drawn, â€explains Pitter. Witty World by cartoonist Klaus Pitter will be on display at the Indian Institute of Cartoonists until December 25.