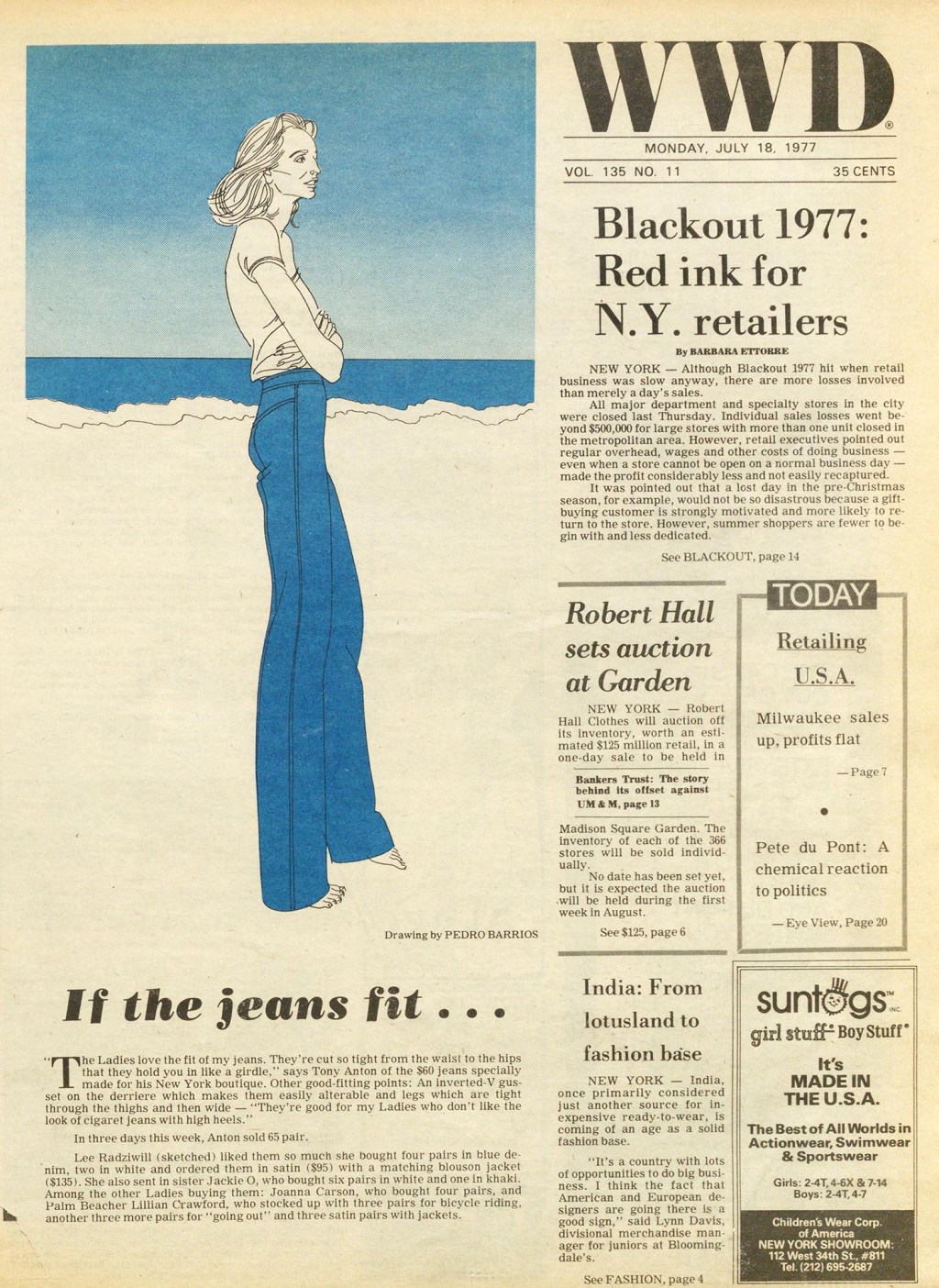 Fashion illustration is a combination of literal representation and interpretive commentary, recorded in the moment. The art of fashion illustrators featured in Women’s Wear Daily throughout the 20th century is proof of this. The work of these artists showcased the fantastic aspirations of fashion and its influence on trends surrounding popular culture, often in real time.

WWD introduced fashion illustration to its readership from its inception in 1910, used as both an editorial and marketing tool. The garment pictured conveyed what was fashionable and salable at the time. With perfectly illustrated fashions, combined with columns of business and social newsprint, WWD has helped sustain and establish a thriving industry. His daily editorial sketches have been attributed to a team of artists who have widely recorded fashion entries and exits, locally and internationally.

Leagues of fashion illustrators have left their mark on WWD by rolling up their sleeves and getting to work imagining the designers’ creations. Kenneth Paul Block reigned supreme as a prominent talent and one that others looked to for inspiration. Block joined WWD in the late fifties and stayed until the early nineties, exiting when the department was disbanded as photography became mainstream. Today’s profile of him and his work is a hallmark of this week’s tribute series to WWD Illustrators. Others such as Steven Stipelman, Robert Melendez, Robert Passantino, Glenn Tunstull, Kichisaburo Ogawa and Richard Rosenfeld will also be featured.

Former model Halston Chris Royer, who owns a collection of Block’s sketches, said of him: â€œHe was picky. He had an ascot, his white shirt, his jacket and light leather shoes. He was so spotless. He was like a great English gentleman.

Describing how Block worked while drawing it in Halston’s showroom, Royer said, â€œHe was looking and he was focusing on your hands. He felt that expressing this was very important. When you were there talking to another model, he immediately understood it. He also used a lot of magic markers as he worked for Women’s Wear Daily and the ink absorbed. He could get a really good line for the sketches. The nature of the paper was cheap and you had to make it bold and fabulous. That’s what he did.

Royer said: â€œI am always fascinated by illustration. The way they can sketch the body line and capture those little details. The line can reveal the whole story. You can see the dress and you can see the attitude. It’s like you don’t need so much. In the photos, that’s all. You have to have all the details in there, especially now because everything is being captured because it’s digital.

â€œWhen you’re dealing with fashion illustration, it’s the world. You can do whatever you want, â€she added.

WWD’s legacy in fashion illustration can be seen in the early 1920s – Ruth Reeves’ designs were featured often in the newspaper and on the cover. In addition to being a textile designer, Reeves was one of the many fashion illustrators working in the field during this time.

Over the years, generations of fashion illustrators have joined the ranks of WWD and influenced the genre, including Antonio Lopez, Steven Meisel, Pedro Barrios, Jeff Britton, Deborah Marquit, Carmen Varricchio and Charles Boone. A few of the alumni, like Robert Young, who went on to teach at the Fashion Institute of Technology, and Joel Resnicoff died quite young. Resnicoff was only 38 when he died in 1986. His niece continues to pay tribute to his vibrant work via an Instagram account that showcases his designs.

By the 1930s, WWD had introduced one of its distinguishing features – “They Are Wearing”, a column that used fashion illustrations or photographs to highlight what women wore on the streets and at events. social in the world’s fashion capitals. In the early 1960s, artistic renditions of trendy fashion dominated the front page as WWD began to promote a new ideal, embodied in the symbolic modernization of the social and political changes of the moment induced by young people. Gone are the stereotypical styles of fashion in visual and written form. Enter the individual styles of the fashion illustrators.

The renderings of these artists in the pages of WWD have continually captured the spirit of the times. The social and political commentary of the day came via illustrations that portray the new socialite celebrity, embodied by Jacqueline Kennedy Onassis. During this time, fashion sketches and artistic stage portraits by staff artists helped create and establish the celebrity designer’s new cult.

These stylistic fantasies might not have seen the light of day without Block, who is considered one of the most influential fashion illustrators of the 20th century. Her signature “figure in the gesture” helped provide the catalyst for change in WWD’s visual representation of fashion and society. Block was accompanied by an A-list of talents that included Stipelman, Tunstull, Melendez, Passantino, Dorothy Loverro, Catherine Clayton Purnell, Ogawa, Rosenfeld and others. Each would document the history of fashion with an individual style.

When the company was based on East 12th Street in downtown Manhattan, 10 or more illustrators sat together in the same separate room in the editorial department, each working on their daily deadlines. The room crackled with competition and camaraderie, according to some former illustrators. Used to chasing the clock as part of their work, illustrators regularly wondered what they thought of their designs, Ogawa said. For new graduates, like Ogawa was when he first joined, “It was intense,” he said.

Former art director Andrew Flynn, who joined the company in 1978, said the illustrators sat along the edges of the room and it created a very creative atmosphere. â€œIt wasn’t like the newsroom where everyone was typing madly. Publishers had to come back to this other world, â€he said.

While 10 a.m. was the official departure time, most, with the exception of the very early Passantino, arrived a little later, depending on the previous night’s festivities in the late seventies and eighties. twenty. But the majority had “phased in” by 11 a.m., Flynn said.

Most of the team, with the exception of Block and Stipelman, regularly worked from â€œsketchesâ€ provided by the designers and sometimes fabric samples, instead of drawing a live model. Borrowing from the French word for “sketch,” a sketch is a quick sketch of a fashion figure that serves as a blank canvas for drawing clothes.

After the sketches were completed each day, they were attached to a cardboard board with a digital stamp so that the print shop would know where the sketch belonged in the newspaper. Every day at 2:30 p.m., a driver stopped at the art department on the 12th floor to collect the sketches in manila envelopes. â€œIf they weren’t ready it was a big deal because another car would have to be ordered later. And it was expensive, â€Flynn said.

Merle Thomason, who ran WWD’s Fashion Library for decades, recently recalled how fashion illustrators are among his best clients. â€œThey needed my information more than anyone. If they needed to put something in the background of their drawings that was faithful to Rome, Paris or London, they would come and look at the albums. Animals, colors, trains, butterflies – name it, we had an album for that, â€she said. “They might say that an English lady often walks a dog, but they might need a special type of dog. [to draw]whether it’s a terrier, an afghan or a bulldog.

Considering how fashion illustrators elevated art on the printed pages of WWD and often the handwork of designers, Thomason said, â€œThey made everything beautiful, not gloomy and dreary. A really good fashion illustrator can make a bad design look like a million dollars. But when a photographer takes a picture of it, it doesn’t.

Esteemed fashion illustrator Bil Donovan, who works for Dior Beauty, Saks Fifth Avenue and other fashion operations, named Block as WWD’s peerless talent. â€œHe was the master and he held the throne as the king of illustration at Women’s Wear Daily,â€ he said, while praising Stipelman, Tunstull, Purnell and Loverro.

Several former WWD illustrators have taught at the New School’s Parsons School of Design and the Fashion Institute of Technology. Donovan took a course at Parsons taught by Meisel in the early 1980s, just before the latter embarked on a flourishing career in fashion photography. â€œHis class was greatâ€¦ I went there and it was like a revolution. The models weren’t 30, 40 years old. They were beautiful. Steven had 19 and 20 year old children. They were hip and punks and New Waves. It was cool and that’s how he taught with that energy. It was all about the energy – throw the energy into the room, â€Donovan said.

â€œWhat is really important is that learning the stylization, selectivity and editing that comes with fashion illustration are valuable tools for creating illustrations outside of the fashion figure,â€ like creating an environment, a still life or a hotel room. Being able to use this information to style an illustration is invaluable. And it makes people think twice.

Working in a ‘Hive of Activity’: An Insider’s Perspective from Former Artistic Director Andrew Flynn

Kenneth Paul Block: an artist in a league of their own

Robert Melendez looks back at the art of live fashion sketching