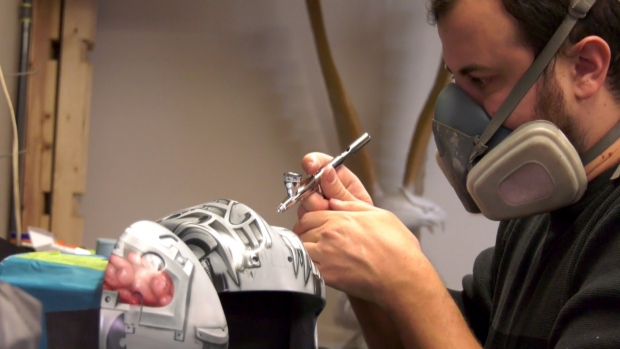 CALGARY – Jordon Bourgeault has always dreamed of qualifying for the NHL, not by scoring a big goal or making a big save, but by painting a mask for one of the league’s goaltenders.

This dream will come true this season.

The Calgary airbrush artist will paint a mask for one of the games’ biggest stars, Montreal Canadiens goaltender Carey Price.

“He kind of randomly messaged me on Instagram and told me he saw another mask that I had done and said it was one of the coolest he had. never seen, â€said Bourgeault.

“That was quite a compliment so I kind of hit him and said well, let’s talk dude. Maybe we can paint one for you.

Price agreed. The mask Price loved had a biomechanical skull theme and Bourgeault says that will also be what this one will be, but it will have some cool twists as well.

“So we’re kind of taking that idea and rearranging it,” he said.

â€œSubtly, there are nods to the old Guardians and just little things like that, so when you step up and look at the details, you can really find all of these hidden gems. “

Bourgeault says he would have been happy to paint a mask for any goalie in the league, but the fact that it was Price is huge to him.

He knows this is a great opportunity and says he’s going to make the most of it.

â€œMy thing is the high level of detail and I’m pushing really, really hard,â€ he said.

â€œI really want to do it as well as I can and make a really big impression. I really hope to see other NHL stars come to me as well.

Bourgeault says it’s going to be really exciting when he sees his work on Price for the first time this season.

â€œI’ll support my guy (Price) you know. I’m excited to watch the NHL this year and see what happens and hear the interesting things that the announcers have to say about the mask, â€he said.

“They still have a lot of great photos of the mask so I can’t wait.”

Bourgeault worked hard on this project. It has been uninterrupted for a month. He says he’ll be ready for Price when the Canadiens enter the regular season, which is slated to begin in January.

Behind the scenes of fashion illustration at WWD