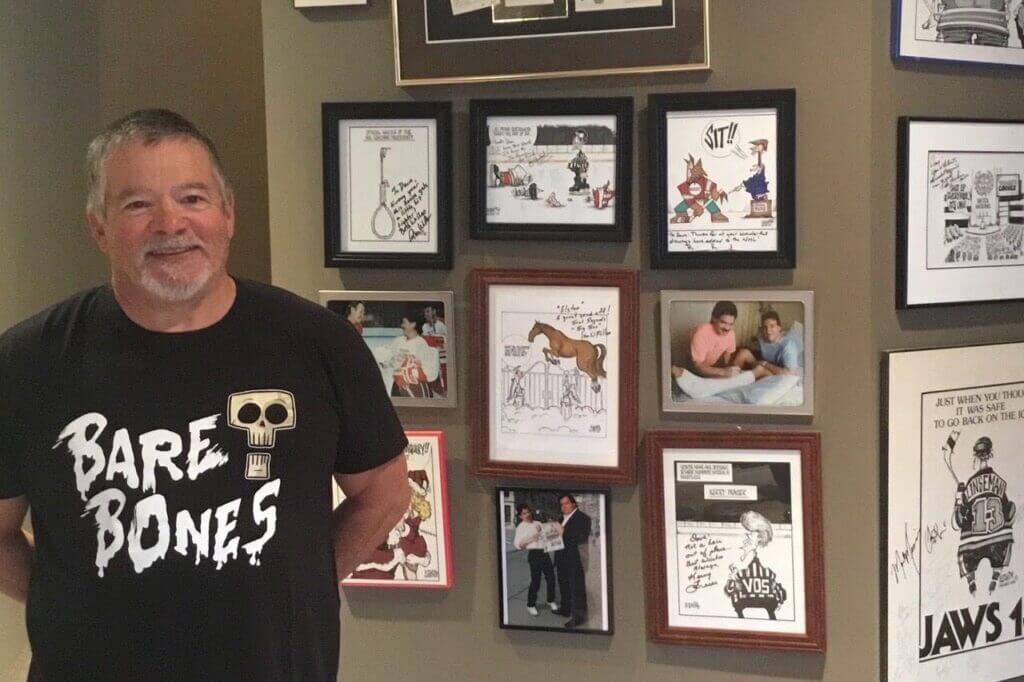 Dave Elston is a semi-retired artist who lives in Calgary with his wife, Kaida, their cat, Annie, and their 26-year-old horse, Baby, whose residence at a nearby stable prompts Elston to fondly describe him as: “The l most expensive lawn ornament in the world.

A wall in the basement of their home illustrates how far his reach once extended, and not just to a stable across town, but across North America. For most of his career, Elston was commonly known as Canada’s only full-time sports editorial cartoonist, and he has a galaxy of autographs and framed memorabilia on display from the same NHL personalities he was once paid to skewer.

His work has appeared in Canadian newspapers, as well as The Hockey News and, for a time, as animated shorts on “Hockey Night in Canada”. He is a two-time art school dropout whose ability to tell a story within a single frame makes his work instantly recognizable to readers of a certain age.

“He should be an Order of Canada guy,” said TSN host Jay Onrait.

Elston, now 63, enrolled at what was then called the Alberta College of Art with the dream of becoming a commercial artist. He quickly felt out of place. Work deemed to contain cartoonish imagery has been criticized rather than praised. And besides that, he also loved sports.

In 1980, he contacted his former high school football coach, who was an editor at the newly launched Calgary Sun. (Elston said he was 5-foot-2, and when he was a running back, someone nicknamed him “The Galloping Fire Hydrant.”)

The newspaper gave him $25 per cartoon.

Within a few years, Elston wanted to expand his reach by organizing his work across Canada. He sent packets of his cartoons to small newspapers across the country. He had one package left after the mail spree and, on a lark, he decided to send it to The Hockey News in Toronto.

Bob McKenzie was the editor. He was only a few years away from his job when the package landed on his desk. He wanted to separate the publication from the idea that it was the editorial arm of the NHL – Ken McKenzie (no relation) founded the paper in 1947 while working in the league – and felt that an editorial cartoonist would help this cause.

He hired Elston and gave him editorial freedom.

“He was a giant in terms of the impact he had on The Hockey News,” McKenzie, who is now a semi-retired NHL insider, told TSN.

His favorite Elston cartoon involved Wayne Gretzky and a coach who misjudged his own influence behind the bench. Robbie Ftorek was coaching the Los Angeles Kings in the late 1980s, and he cut Gretzky’s playing time, going so far as to bench The Great One for part of a game in November 1988.

McKenzie can still view the cartoon. Ftorek was drawn into a frame as one of the Three Wise Men, arguing as he stared into the manger: “I don’t know, it looks like another baby to me.”

“It was absolutely fantastic,” McKenzie said. “It was one of the best cartoons I’ve ever seen.”

Hunter, the longtime NHL forward, was also a frequent muse. Now 61, he admitted his “famous nose” made him an easy mark. But it was also the star of his favorite Elston cartoon.

He was playing for the Canucks that season. In the image, the Vancouver coach examines a box of Breathe Right nasal strips, which some players have used because they believe it boosts their performance on the ice. The trainer notices that the box of fresh produce is empty and asks who ripped off all the bandages.

A few years later, as Hunter wrapped up his NHL playing career with the San Jose Sharks, Elston popped up an animated short on “Hockey Night in Canada” at the start of the season. With the theme music from the movie “Jaws” playing in the background, the cartoon showed what appeared to be a shark’s fin swimming through a pool towards the Stanley Cup.

“This thing hits the Stanley Cup,” Hunter said. “And it jumps out at me: I was swimming on my back.”

“He does a brilliant job and he’s not mean,” said Burke, who is now president of hockey operations for the Pittsburgh Penguins.

Burke said he sent Elston a handwritten note of appreciation after seeing a cartoon in 1989, following a hard-fought playoff series between Vancouver and Calgary. The Flames advanced after an overtime goal in Game 7 – ultimately winning the Stanley Cup – but Elston’s frame showed how exhausted and battered both teams were.

It was a sign of respect for the Canucks, who Burke worked with.

“He was making fun of somebody, but he was doing it in such a way that you couldn’t stay mad at him,” Burke said. “He was really a gentleman in a company where you had to be a bit stupid”.

Burke is also now co-starring in his own cartoon series. Along with host Jeff Marek, he appears in Sportsnet’s animated shorts “Hey Burkie”, which are available online. (Neels Britz is the artist behind the series, with Amil Delic and Jason Harding serving as creative leads.)

“I can ramble in my stories,” Burke said. “I can explain things. Elston had a hit.

“It was almost like an alternative comic, but in a mainstream publication,” said TSN anchor Onrait. “You couldn’t walk past one of his comics without stopping and paying attention because of that unique style.”

Onrait has a custom framed Elston cartoon in his office. He said it was a gift arranged by his wife. We see a man pushing a TSN pram under the text: “The baby Onrait said his first word”.

The speech bubble coming from the car is a classic Onrait exclamation in bold type: “Bobrovsky!!”

Onrait grew up in Edmonton during the height of the “Battle of Alberta,” when the Oilers and Flames seemed to meet every spring to decide which team would qualify to win the Stanley Cup. Elston, he said, was a major part of that era in Calgary.

“A very important artist in the history of this city,” he said. “I don’t think that’s hyperbole. I don’t think I’m exaggerating. I really believe he was not only a great artist, but also a chronicler of that era, especially that era of the 80s, where the teams were so good.

If an NHL player reached out to request a copy of their work, Elston said he would typically mail two copies: one for the player and one for the player to autograph and return. Most of his subjects, he said, seemed to get the joke.

Most of them, he says, but not all.

“I had one once in a while where someone walked up to me and was like, ‘Oh, you did a cartoon of me when I was playing football for the Stampeders,'” a- he said. “So I’m going to say, ‘Oh yeah?’ And they’ll say, ‘I didn’t like it.’

He stopped laughing: “I’m kind of like, ‘OK, are you hitting me now?'”

In 1991, Flames forward Doug Gilmour landed in an Elston cartoon after being awarded $750,000 in salary arbitration. It was just before the December holidays and, according to the Province of Vancouver, the cartoon showed Gilmour asking for charity with a sign: “Young couple, one child, one father earning $750,000.”

Gilmour was reportedly unhappy with his portrayal, but he never contacted the artist.

“His wife did,” Elston said. “She wasn’t happy. I’ll leave it at that.

He said he still draws occasionally, mostly for his own amusement. He said he was open to new ventures, but was settling into retirement life differently. His wife, Kaida, is also retired.

“I’m grateful that I kind of reached that sweet spot where I was able to make a career out of it and come out of it in time with enough hope to retire,” he said in a statement. stopping to laugh again. “Or, I guess, I’ll find out.”

A man who fights against himself