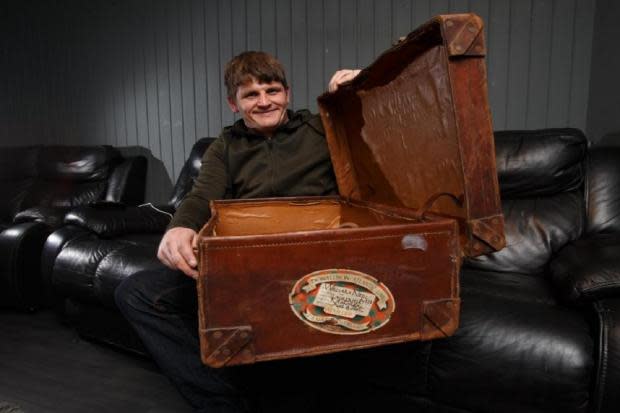 IT’S NOT every day that you discover a little piece of Glasgow’s history in your loft.

When Ross and Sam Porter found a leather suitcase engraved with the name of one of the city’s most famous writers and cartoonists, they were stunned.

And now, thanks to Times Past, Bud Neill’s travel suitcase is on its way back to his family.

Bud was one of Scotland’s greatest cartoonists, creator of the famous Sheriff Lobey Dosser, Sheriff of Calton Creek in the Wild West of Arizona. At the height of his career, Bud was a megastar, earning £1,000 a week in the 1950s and 1960s.

He started at the Glasgow Evening Times in 1944, and Lobey and his two-legged horse El Fideldo made their newspaper debut five years later. He was also famous for his “wee wifie” cartoons, and after his death in 1970, his creations became cult worldwide. A statue of Lobey, Rank and El Fideldo was unveiled in Woodlands Road in 1992 and recently a giant mural painted by renowned London street artist Voyder was revealed in Partick.

Adam MacPhee, whose mother Nora is Bud’s daughter, read our story about the Porters’ unexpected discovery.

“My mother and I were amazed to read your story about my grandfather’s case,” he said. “It’s amazing that it’s coming back after all these years.

“We would like to thank Sam and Ross for finding it and The Glasgow Times for bringing us together with this memory of my grandfather.”

Adam explains, “He used the case while visiting his cousin in Canada. My mum remembers the brightly colored clothes he brought back for the family – a great contrast to the lackluster offerings here at the time.

Adam says he and his mother are baffled by how the case ended up at Ross and Sam’s house in Dunfermline. The couple had been living in the house for 10 years when, investigating a leak in the attic, Ross discovered it was hidden in a corner.

“We almost threw it away, but something made us check the name and we were absolutely amazed to find that Bud Neill was a famous cartoonist from Glasgow and known around the world,” Ross said. A sticker on the case, with William Neill’s name, gives details of a trip he made on a ship called the Laurentia – the Donaldson Atlantic line – in August 1951.

Adam said: “We have no idea how he got to Sam and Ross’ house. My grandfather and my family moved to Dunfermline from Lenzie in the early 1950s.

“He thought it would be a good place to raise my mother and her three brothers. They lived in Halbeath Road, where, with his typical sense of humour, he changed the name of their house to ‘Dim View’.

“His studio was in the nearby village of Halbeath. He has already organized an exhibition at the studio. One day he decided to close early and put a sign in the window that said, ‘Budgies Repaired Saturdays’.

Adam says he and his mother are touched by his grandfather’s legacy.

“It’s good that there is still so much interest in my grandfather, as the new mural in Glasgow recently showed,” he adds. “We still have his office and some original works within the family. It would be great to see some of that on public display again.

Ross and Sam were thrilled to hear that Adam had made contact.

Ross said: “This is great news, we’re really happy the family got her back – hopefully it brings them a laugh and brings back some great memories. We’re glad we were of help.