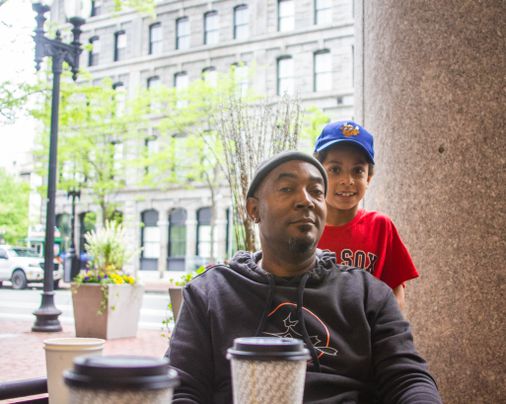 The show is set in San Francisco, where Knight has lived for the better part of two decades, but the artist is originally from Malden. Last weekend, he returned to Massachusetts to receive an honorary doctorate from Salem State University and to attend the unveiling of “Life’s Little Victories,” a mural he designed for the Malden ARTLine. in his hometown. The Globe caught up with Knight at Faneuil Hall, where he used to draw caricatures in college before weekends celebrating his roots.

Since this is a Boston publication, let’s talk about growing up in Malden. How was it?

Get the Big Task

Your guide to staying entertained, from live shows and outdoor entertainment to what’s new in museums, movies, TV, books, restaurants and more.

I have been very lucky. Between grades four and six, my sister and I attended the Major Works Program for Gifted Students. All we did was plays, puppet shows, performances, all that really cool stuff. I enjoyed that time, and that’s when I was drawing cartoons.

When we went back to normal school, I continued to draw comics, and my first autobiographical comic was in eighth grade. There was a food fight, and I was laughing at everyone. The people I thought were going to kick my ass because of it were just super excited to be there. People just want to be seen. That’s what I missed the most growing up in school: the story wasn’t my story. My first black teacher — [I was] a junior in college is when I got it.

Why do you think your work is so autobiographical?

I come from a family of storytellers. Whenever there were gatherings, I listened to my family tell these hilarious stories. I don’t know if it was all true or not, but it was hilarious, and I love this idea of ​​never letting the truth get in the way of a good story. That’s what I want to do in comics. I trust first-person experience. On my small scale, with the work that I do, I hope to be a doorway for people to find the truth.

How did “Woke” become a TV show?

My intention was to move to San Francisco in 1990, stay there for five years, treat it like my college; but i stayed there for 16 or 17 years because i had such a great time. In Los Angeles, [the city] it’s about meeting and chatting, showing up in front of people. This production company said, “Yeah, let’s try to develop something. [My co-creator] Marshall Todd came along and his work really stood out because there were no racial tropes. My whole pitch (for the show) was: my character is the Charlie Brown of activism, [he] try to do the right thing but it doesn’t work very well. It came out exactly as I imagined.

How does it feel to be back in town this weekend, going back to Salem State University?

I want students to maybe see something in my story and be like, “Okay, if this guy can do it, maybe it’ll be okay.” Find out where the right toilet is and you’ll be fine. This is going to be my nerd opening statement. Retired teachers are going out and my sisters are flying in. We’re going to do a screening of “Woke”. I realize now that the first season came out during the pandemic, so we never got a chance to watch it in front of an audience. It’s so satisfying to hear people laugh at jokes you meant to be funny. Even my 13 year old son wrote a joke which is in the [second] season.

Plus, this Sunday in Malden, Malden Arts is unveiling a mural of your work.

I’m so excited. They blew up these signs, they actually made the signs bigger than they thought they were going to. It’s humbling and I guess it’s like the to-do list. More than anything, it allows me to keep creating. It allows me to do what I think I was put on this earth to do. I think that’s all most people want.

What’s next for Keith Knight?

Sam Trottenberg can be contacted at [email protected]