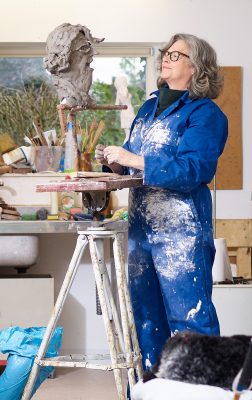 In Focus: How the ‘Tottering Hall’ designer became a sculptor

Best known as the creative force behind Dicky and Daffy, it was the death of her son that prompted Annie Tempest to learn “the grammar of the sculptor’s language”, discovers Ian Collins.

Annie Tempest’s comic in Country Life has long been the reason why, as the late Duke of Devonshire noted, many of us read magazines upside down. The wavering good humor of a rarefied world also resonates as ironic commentaries on universal life, but, for the artist-author, it is all deeply personal.

As is now known, Lord ‘Dicky’ Tottering is largely modeled after Annie’s father and Lady T (Daffy) partly after herself. Tottering Hall is very much Broughton Hall, near Skipton in North Yorkshire, seat of the Tempests since 1097 – a recent transformation from gin palace to welfare sanctuary ripe for a new pamphlet.

A character in this ever-changing cartoon will be 18 forever. It’s based on Annie’s son Freddy, who died of an accidental heroin overdose in 2011. Country Life’s resident cartoonist hasn’t missed a single week to lift the nation’s spirits since arriving in 1993 , but some things are beyond the joke: the death of a child is almost beyond imagination.

In shattering depths of grief, a distressed mother picked up the pieces of plaster, ceramic, mosaic, cast resin, glass, stone and bronze, saving herself and reinventing herself as a sculptor. Ideas exploded as she struggled with the feelings she needed to express.

Today, she has found her most intimate voice in vivid bronze portraits of conductors and dancers. More than performance records, these abstract figures are a tribute to vitality. Capturing focus and movement, they celebrate those moments when we are fully and fabulously alive. “Viewers can add their own narrative,” explains the sculptor. “Where in your life did you find a passion that affected every fiber of your body in this electric way?”

The second of five children, she and her older sister Bridget were born in Zambia. The family moved back to England in 1962, when Annie was two years old. She has no childhood memories of Africa, but considers it – through 40 almost annual visits to Kenya – her spiritual home.

His father, Henry, was a second son in a clan bound by primogenitor rules favoring firstborn males. Autistic and alcoholic Uncle Stephen went a step further and evicted his loved ones when he inherited Broughton Hall on his 21st birthday. Henry did all he could to earn a living, trying his luck in Africa and meeting his wife, Janet, at the Rhodes-Livingstone Institute in Rhodesia.

Back in England, the penniless Tempests were taken in by a great-aunt who presided over Kirtlington Park, a Palladian country house in an Oxfordshire park landscaped by Capability Brown.

“We lived like vermin in the cellars,” recalls Annie. “Ejected from our windowless basement every morning, we became feral children. I made myself a home in a blackberry bush.

“I was also dyslexic so I was taken out of school and sent to class with a woman from the village. Lessons were limited to playing whist, counting money, and naming wildflowers. Since art was Bridget’s domain, I didn’t really start drawing until I was 24.’

Uncle Stephen eventually loaned his younger brother money so the cellar dwellers could build a small house in a corner of the Kirtlington estate, with Annie helping to lay the foundation. When the moneylender died suddenly, his father inherited Broughton Hall, along with vast debts. Life in the ancestral heap was hellish: tadpoles swam at the taps and snow lay on the pool table. They usually dressed for dinner, donning hats, coats and gloves to brave the freezing dining room.

“How dad saved the estate and passed it on to my brother is a miracle,” Annie thought to herself. “Luckily Roger is an entrepreneur and he did a brilliant job.”

It was always brutally clear that the girls of Tempest would have to go their own way. Annie became a medical secretary in London, typing and filing, but also observing operations and learning anatomy – an ideal base for a figurative sculptor.

Relying on a comic gift and exuding a talent for illustration, she created a book titled How green are your rubber boots? This led to two successive national newspaper cartoon runs and a Cartoonist of the Year award. Then she moved on to Tottering-by-Gently and her natural home in Country Life. In 2009, the Cartoon Art Trust gave him the Bridge Award for portraying the British character. Today, with a career spanning 40 years, she may be the Hogarth of our time.

Marriage to composer James McConnel, in 1991, produced two children, Freddy and Daisy, and a move to Norfolk. James made a gripping TV documentary suggesting that Mozart suffered from Tourette syndrome, like himself. Or, as Annie put it, “James has Tourette’s and we suffer from it.” They divorced in 2006, but remain friends.

Freddy McConnel, musical prodigy, table tennis champion and member of Mensa (IQ 144), also had Tourette’s. With an addictive personality, he had smoked and drank in secret since the age of nine. Five years later, he was addicted to hard drugs and his family was doing everything possible to get him off the hook, through specialist centers in Oregon, the United States, South Africa and The Priory rehabilitation clinic in Essex. Hopes for a reprieve ended when Freddy overdosed after a heroin relapse.

As she turned to sculpture to deal with the enormity of bereavement, Annie was asked to do the statue of Amy Winehouse outside the Roundhouse, London NW1. His grief was too strong. Instead, she made for her garden a life-size statue of Freddy wearing his favorite shroud-shaped Moroccan djabella – an image of infinite peace.

Creativity was the artist’s way back to joy. She is immensely proud that her daughter Daisy is now an award-winning luthier (www.tempestguitars.com), who sings and plays her own instruments. Meanwhile, Annie’s life has never been so rich. As she says: “After learning the grammar of the sculptor’s language, I finally moved on to song.

Liana Finck explains how to write like a cartoonist ‹ Literary Hub