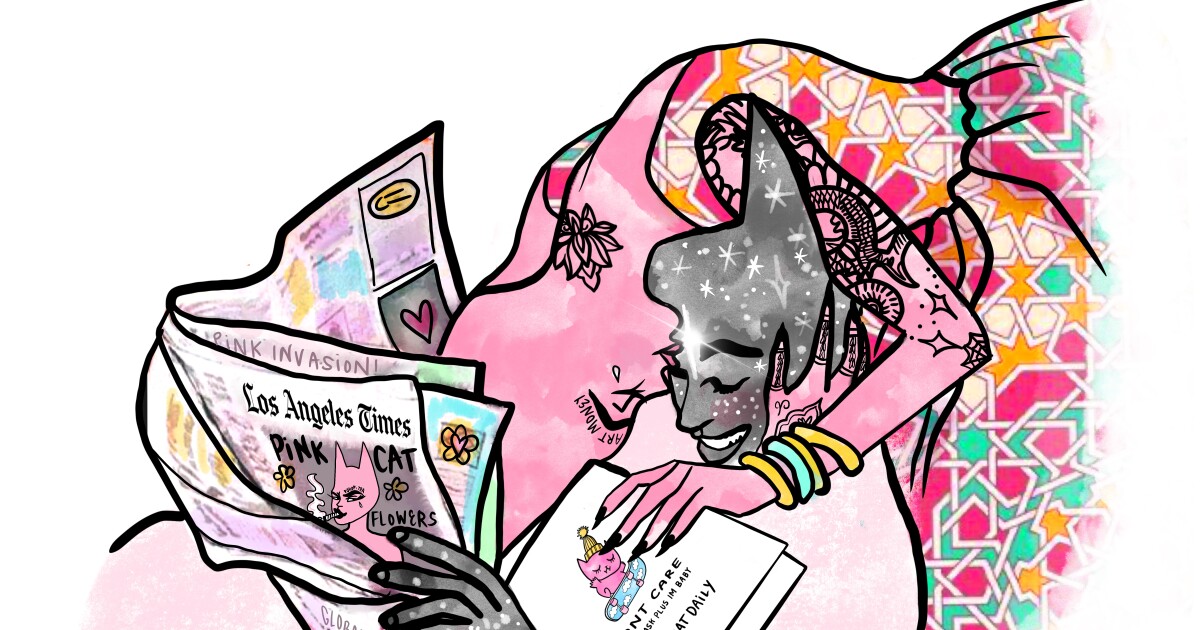 Pink Cat, the courageous feline star of the Bay Area native’s 5-year-old series, is covered in tattoos, balances her spiritual practice with occasional drug use, and speaks in the heavy language of the internet. With panels exploring tarot and astrology, party culture and polyamory, Pink’s exploits have endeared her to a stable of (mostly) young social media users. â€œPink Cat is an experience on Earth,â€ Moeel explained over drinks in Hollywood. “It is the document of how the spiritual and the physical are a journey of transcendence when it comes to the expansion of consciousness.”

The mix of humorous one-liners, internet-inspired dialogue and light illustrations has attracted over 250,000 subscribers, with individual posts regularly racking up over 10,000 likes. With her distinctive tastes and relatively dark wit, Pink Cat has the makings of a Gen Z Garfield – a comparison that Moeel welcomes. â€œThis is my dream come true,â€ she said. â€œI grew up on ‘Garfield’. I grew up reading “Calvin and Hobbes”. So yes, please do this to me.

His chosen avatar species is no accident and surely contributes to his success; from ancient Egypt to viral cat memes, feline appeal may be our only cultural constant. Moeel therefore hopes to attract more readers ready to join the cult of the cat – and also induct them into his own brand of idiosyncratic mysticism.

â€œMore than ever, the relationship between us and animals is being tested, and the survival of our species depends on our understanding that we are no longer Homo sapiens, that we are transhumans,â€ she writes in the preface to â€œDon’t Care Didn’t Ask Plus I’m Baby,â€ his recent book of over 1,400 Pink Cat panels. â€œWe have crossed the threshold of being defined by our physical body. We exist online, in the ether. And we need to understand that we are connected to other species … as much as we are connected to the technology that propels our evolution forward.

Despite all the parallels between Pink Cat and her creator, for Moeel, the character feels like an invented alter ego. â€œI really think of it like I’m an artist who channels a mind and a zeitgeist,â€ she said. “Sometimes I say she has a collar or a choke around me because I’m like, ‘I just want to find a job, I don’t want to do this anymore! There is so much uncertainty when you should eat what you kill.

Pink, whom Moeel describes as the “Internet deity”, is influenced by the “pan-Middle Eastern” culture in which the artist was raised: she was born in Iran but raised in the Bay Area by his Turkish mother and his Iranian Arab father. . She speaks Farsi, Turkish, Spanish and French, as well as a few Arabic words. Prior to creating the comic, Moeel graduated from Parsons School of Design, did fashion and digital art, and released a rap album under the nickname Cult Days.

â€œI am the first artist in my whole family,â€ she said. â€œAnd for us as the people of the Middle East, we are not encouraged to pursue the arts. So Pink Cat succeeded despite all of these things.

Her background makes it especially interesting that Pink Cat is, well, pink. “The point of making her a pink cat is that it’s not about me, my race or my ethnicity, because my experience as a human is so much more than my shell “, she added. â€œThis is our chance to suspend reality and just have these human experiences that we all go through. “

Pink was born in 2016 in Baja California, where Moeel was on vacation with a Korean American friend from art school and her siblings. Her friend “had this comic book paper and I started drawing Pink Cat and Blue Cat,” Moeel recalls. “I used Google Translate in Korean [for the captions], and they laughed because Google Translate is so clunky. It was just for me to talk about stuff and show my family and friends, and then when more and more people started following him, that’s when I thought to myself: â€œOh, it’s like a thing. “

Once his followers hit 6,000 people, â€œI was like, ‘Oh, I got it!’,â€ Moeel said with a laugh. â€œMy parents would tell me, ‘Find a job!’ In June, Moeel published his book, a 236-page, 13-inch-high collection of Pink Cat’s first four years. (The cover and title of the book are from one of the accounts most popular posts, a January 2020 illustration of a toddler Pink riding a skateboard that garnered over 16,500 likes.)

“We were just trying to take it off [of] Instagram and in print because you rely on a third party, Facebook, to protect your content, â€she said. “So I really wanted to fit it into the physical space for two reasons: one, to protect my work and two, to get people to read a comic.”

The book was completed in about three months and was published locally in Berkeley. Rather than looking for a distributor, Moeel and his team decided to sell through social media. She is also working on an animated series about the characters, deployment 10-second clips on Instagram before finally throwing a sizzle reel on platforms like Netflix.

Pink’s relationship drama is as juicy as any reality show, spinning through four partners named for different shades of blue – Aqua, Electric, Navy, and Sky – all based on real people in Moeel’s life. â€œIt’s a conversation between me and me about them,â€ she said.

The artist has long felt a special affinity for cats, in particular an ancient Egyptian deity who has fascinated her since college. â€œTo me, the goddess Bastet is the embodiment of a feline animist force,â€ Moeel said. â€œIn addition to all that is feminine energy, Bastet was the protector of the grain in ancient Egypt and, within it, balanced the ecosystem of society and civilization. So I think Bastet represents this symbiotic relationship between humans in a civilization and the animals that love and protect us.

It highlights Pope Gregory IX’s link between cats, Satanism, and witchcraft, which led to medieval Europe mass murdering animals, ultimately leading to the proliferation of rats and mice carrying the bubonic plague. “Most viruses come from animals, abuse of their territory or [consuming them], “she said.” Societies that respect and love cats are societies that respect and love people. In Turkey, it’s a feline culture. There are cats everywhere. Cats are in the news! I therefore thinks this is an indication of a society how well it takes care of the animals around it. “

She also sees Pink Cat, in a way, as a role model. â€œ’BoJack Horseman’ and Pink Cat are like the two cartoons of our generation that show drug addiction,â€ Moeel said. “We wrote weed in the show [through the character] Smoke [a cloud of smoke]. Everything revolves around the destigmatization of plant medicine and psychedelic and psychoactive plants. So many people are still in prison because of the plants! It is a question of social justice. I think a lot of what I do with Pink Cat is cultural propaganda, but it’s positive propaganda.

When asked where she hopes to take the Pink Cat brand, Moeel details a three-step plan to take over the world. First, the physical and 3D shopping experiences. “What I would like is for people to be able to put the Oculus on and go into Pink Cat’s room or the cafe she’s going to,” she said. “And then, of course, a [physical] retail experience where we could maybe have a pop up or music festival and get other artists involved.

â€œOne more step is a theme park,â€ she added. “Imagine a Disneyland Pink Cat which is a spiritual theme park, so instead of bulls – fairy tale rides, there are different iterations of spiritual experiences.” And finally, she said, â€œI want to be a designer on Mars. “