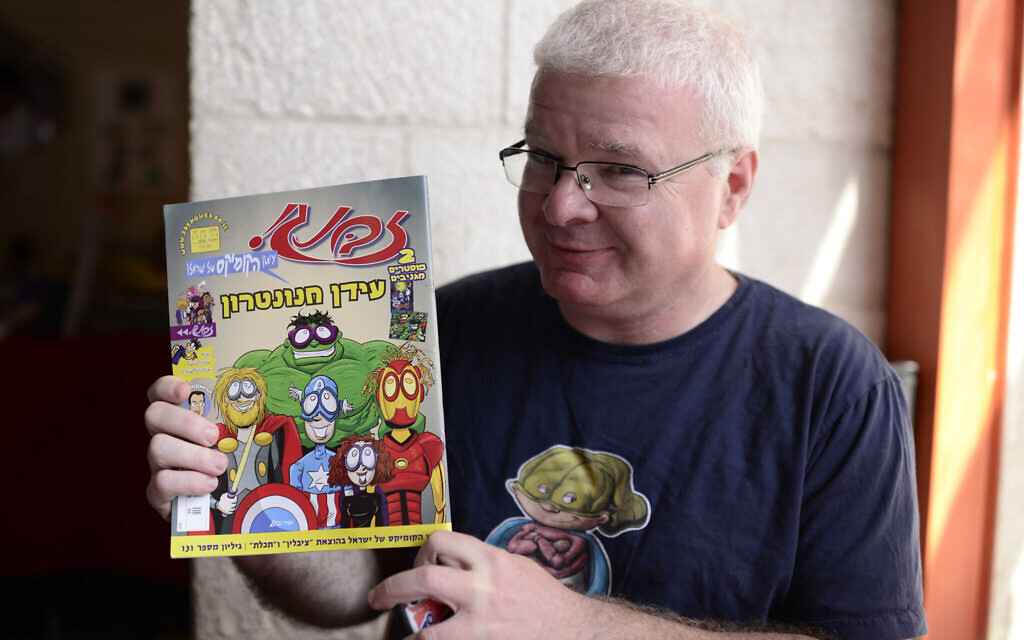 An Israeli comic artist has been attracting attention since Marvel announced on Saturday that it cast actress Shira Haas for Israeli superhero Sabra. He claims the character is based on a superhero he created when he was 15, although he says he won’t sue the American entertainment giant because he can’t afford it. .

In 1978, Uri Fink created Sabraman, a series of comics about an Israeli superhero whose outfit, colors and symbols seem to resemble those associated with Sabra, a little-known character who first appeared in comics. Marvel comics two years later.

Haas, who rose to international fame through his starring role in the hit Netflix series “Unorthodox,” will play Sabra in the upcoming “Captain America” ​​movie, set in the Marvel Cinematic Universe and titled “New World Order.” according to multiple reports Saturday.

In the comics, Sabra, aka Ruth Bat-Seraph, is a former superhuman agent for the Mossad spy agency who occasionally clashes with other superhuman characters such as the Hulk and the X-Men. Her powers include exceptional strength and endurance, and her costume often incorporates the Israeli flag and Star of David.

Sabra, in Hebrew”tsabaris the local term for the fruit of the cactus (commonly called prickly pear). It has long been a term for Jews born in Israel.

Fink tweeted Sunday morning that he woke up to countless tags and messages telling him it was “time to sue Marvel and make some big bucks.”

Sabra will be in CAPTAIN AMERICA: NEW WORLD ORDER.

We will live in a world with live action Sabra in the movies.

I never saw that coming. pic.twitter.com/4iLEBb06wT

He said his editor and co-creator David Herman considered doing just that when Sabra first appeared in 1980, but Fink convinced him otherwise. He said there was no chance of succeeding against Marvel’s attorneys and it was doubtful he even had a case because he doesn’t own the copyright to the word “sabra.” , and Sabra’s superpowers were different from Sabraman’s.

“Nothing has changed since, except Marvel is now part of Disney, with even more monstrous lawyers, so it’s not worth it,” Fink wrote.

“It’s pretty clear to me that at the time someone [at Marvel] saw the hype around Sabraman – there was an article in People Magazine! — and went with the idea,” he said. “But I can’t do anything except maybe try to draw attention to the superhero I started my career with.”

Fink told the Ynet news site that if he had the means, he “definitely” would. have sued Marvel, but that as things stand, it would be “crazy” to take legal action against a huge conglomerate like Disney.

Israeli actress Shira Haas accepts the award for Best Supporting Actress at the 2018 Ophir Awards, sometimes referred to as the Israeli Oscars, in the city of Ashdod, southern Israel, September 6, 2018. (Flash90)

Fink also issued a few words of warning to Haas.

“I don’t predict his portrayal in Marvel will be positive in wake up days like these,” he told Ynet, adding in a separate interview with Channel 12 news: “Those who work at Marvel today are all kinds of progressives. I have nothing against them, but we won’t get the most accurate description of the Israeli-Palestinian conflict.

“I suggest that Shira carefully read [the script], so that the character is not portrayed in an overly problematic way,” he added. “On the other hand, it’s a tremendous opportunity because Marvel has learned to take their most esoteric characters and make them into great characters. Shira has an incredible opportunity.

Israel is so in need of global approval after its narrative was recently shattered that Zionist lobbyists in the United States had to dig up a 40-year-old Marvel “superhero” to polish their image. pic.twitter.com/gFXAY819uZ

Marvel’s Israeli superhero Sabra has many powers, including demolishing Palestinian homes with her mind and murdering Palestinian children with her laser-beam eyes pic.twitter.com/5mye32ZH7f

The new Marvel superhero is an Israeli Mossad agent named Sabra. Can someone explain to me why he continues to use the name Sabra? The first thing almost every Palestinian remembers when we read or hear about Sabra is the Sabra Chatilla massacre, it seems deliberate

MCU character Sabra is best known for trying to pin the murder of an Arab child killed by Israeli forces on the Hulk. A real superhero. https://t.co/GEMfIs1Mpe

And some pro-Israel users have warned that the character’s arc could prove unflattering to the Jewish state.

Some people point out that the Israeli superhero has an anti-Zionist arc in the comics?? Seriously, do you think Marvel Studios and Disney are going to handle this well? Do you think they’re going to do an anti-Israeli character with an Israeli actress?

They created a Jewish-Israeli superhero and called the movie “World Domination.” What could go wrong?

You are a dedicated reader

We’re really glad you read X Articles from The Times of Israel over the past month.

That’s why we started The Times of Israel ten years ago – to provide discerning readers like you with must-read coverage of Israel and the Jewish world.

So now we have a request. Unlike other media, we don’t have a paywall in place. But since the journalism we do is expensive, we invite readers to whom The Times of Israel has become important to support our work by joining The Times of Israel community.

For just $6 a month, you can help support our quality journalism while benefiting from The Times of Israel WITHOUT ADVERTISINGas well as access Exclusive content only available to members of the Times of Israel community.

Thanks,
David Horovitz, founding editor of The Times of Israel