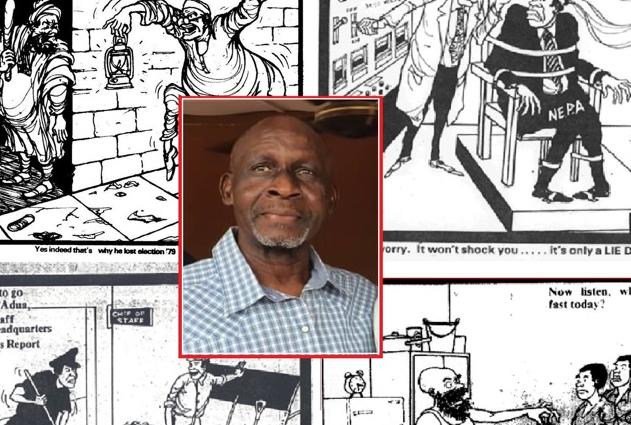 *Celebrate Kenny adamson at 70, it’s celebrating the dean of Nigerian editorial caricature. I had the privilege of working with him as a teenager for PUNCH newspapers in Nigeria. He paved the way for many designers and myself to follow in his footsteps. Kenny, an icon and inspiration to many, is also a famous sculptor and painter.

Suffice to say that Kenny was not the first Nigerian editorial cartoonist. There was Akinola Lasekan (Nigerian modern art pioneer) and later dele jegede and Josy Ajiboye with the latter two, having worked for years for the government newspaper Daily Times. Then came PUNCH, a national independent newspaper where Kenny showcased his cartooning skills and fascinated newspaper readers with his witty, political and stimulating cartoons for PUNCH every day and weekends too.

His cartoons have spared no one. He then joined VANGUARD newspapers where he continued with more impactful editorial cartoons that made him a household name and still is today. A different arrangement with those who came before him. He took his editorial cartoon brand to a different level, drawing local and foreign issues. His cartoons of government officials in power were appropriate. Born in 1951, Kenny graduated from the iconic Lagos art school, the Yaba College of Technology from 1973 to 1977.

He had his first joint exhibition at the Didi Museum in Victoria Island, Lagos in March 1983 and ten years later his first solo exhibition at the same museum. which was declared open by the then first lady, the late Mariam Babangida. From his comic book years, the sculptural works and paintings commissioned by Kenny now adorn public places in Nigeria, most notably in the famous Tinubu Square in Lagos and some of his works are in the presidential villa of Aso rock, Abuja.

Kenny Adamson’s works have benefited from a large sponsorship of Nigerian and foreign collectors. Among the notable personalities, his works have been presented among which Queen Elizabeth II, during her State visit to Nigeria in 2003, President George W. Bush, the 43rd President of the United States as well as several foreign dignitaries.

Congratulations to a living legend at 70, a man respected in the annals of Nigerian art by his peers, mentees and the rising generation of designers, sculptors and painters who still clearly adore him. He will probably appear later in OUR ROOTS.

TAYO Fatunla is an award-winning Nigerian comic book artist, editorial designer, writer and illustrator is a African diaspora artist. He graduated from the prestigious Kubert School in New Jersey, USA. and recipient of the 2018 ECBACC Pioneer Lifetime Achievement Award for his illustrated work OUR ROOTS creation and series – Famous people in Black History – He participated in the UNESCO Cartooning In Africa forum held in Addis Ababa, Ethiopia and the Cartooning Global Forum in Paris, France and participated in the Afropolitan Comics virtual comic book exhibition organized by the Institut franÃ§ais du Sud L’Afrique coinciding with its National Arts Festival. Her image of Fela Kuti was used as a backdrop for Burna Boy’s YouTube channel, the mega-afrobeat hit song “Ye”. –– www.tayofatunla.com/[emailÂ protected]/[emailÂ protected]