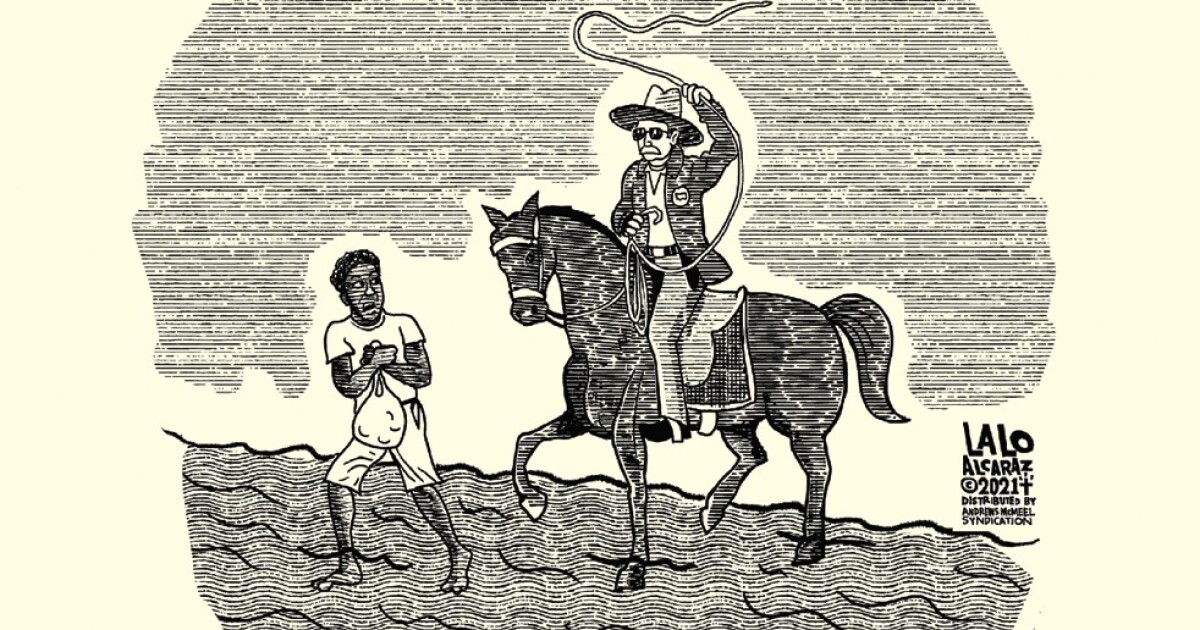 Lalo Alcaraz was 13 when his father, a landscaper and nurseryman in the San Diego area, was killed in a car accident in Tijuana. The child of non-English-speaking immigrants, the young Lalo was quick to call his father’s clients to warn them. Instead of expressing sympathy, however, a customer coldly asked her for the phone number of a replacement gardener.

Stunned, Alcaraz shouted, “It’s my father!” before hanging up the phone angrily. The sting of the trade was formative – a pain that would affect his career path.

“It made me a good edgy political cartoonist,” Alcaraz says by phone now, speaking from the Los Angeles area. “This is what I draw: my father was treated like a mere machine, not even like a human.”

The powerful and often official forces of inhumanity are often exposed and ridiculed in the art of Alcaraz, 58, who is the first Latino cartoonist to receive the Herblock Prize. The honor, presented by the Herb Block Foundation, salutes work that reflects the spirit of the legendary Washington Post cartoonist.

Alcaraz, a two-time Pulitzer finalist, says his artistic role is to fight misinformation in these times of polarization: “That’s what we do as cartoonists, cut through the [bull] and expose it.

His winning portfolio from last year satirizes burning issues such as abuses on the US-Mexico border, the attempted January 6 insurrection, the banning of school books and the rights of agricultural workers. He’s also tackled pandemic health measures — creating cartoons that directly engage Latino readers about vaccine hesitancy and working with entities like CovidLatino.org and the California Department of Public Health.

“No other political cartoonist working in the United States brings such passion, dedication and brilliance to the fight for fair immigration at the border and justice for the Latino community,” the Herblock award judges said at about Alcaraz’s distinctive perch in political journalism.

Jurors made special mention of Alcaraz’s tribute to ‘Tierra o Muerte (Earth or Die)’, artist Emanuel Martínez’s 1967 work depicting Mexican revolutionary Emiliano Zapata who became iconic during the movement Chicano. They appreciated how Alcaraz replaced Zapata’s rifle with a vaccine needle and titled the image “Vacuna o Muerte” – to create “a work that draws inspiration from the past in order to fight the current pandemic”. (His illustrations often nod to artistic traditions, including woodcuts and Mexican muralism.)

“Sometimes I’ll try to make an image that can transcend the moment,” Alcaraz says, noting that if this cartoon’s vaccine awareness “just reached the 70-year-old Chicanos of that era, that would be great” — enough to deserve its doing it.

In one work, he drew a rope-wielding US Border Patrol member on horseback in the style of an antique engraving – visually evoking last year’s viral photo of an officer trying to arrest a Haitian migrant in the Texas. In another, he depicted migrant children confined to cages during the Trump and Biden administrations, with the sign changed from “cage children” to “migrant child facility.” (“Everyone deserves to be screened” under this “hodgepodge immigration policy,” he explains.)

Alcaraz’s border cartoons often spark controversy, as does a black-and-white artwork that compared women’s rights under the Taliban to women’s reproductive rights in Texas. Asked about these works, he said: “You make me understand: all my cartoons have a lot of backlash.

Alcaraz grew accustomed to such backlash early on, often when he satirized what he saw around him in and around San Diego.

His parents met in an adult ESL class at Helix High in East County – his alma mater – and at San Diego State University he became the cartoonist daily newspaper of the main student newspaper. He derided cultural issues as well as aspects of the campus Greek system, until he said his nickname in the mid-1980s newspaper phone list was “Please forward my hate mail”. He says that as a Chicano artist, he drew strength from the MEChA student organization and supported the work efforts of Cesar Chavez.

Alcaraz’s political growth continued while earning his graduate degree in architecture at the University of California, Berkeley. He then moved to the Los Angeles area – where he and his schoolteacher wife raised three children – and pursued entertainment in various forms, including storylines and comedy sketch troupes. He is a writer and consulting producer for the animated series “The Casagrandes” and served as a cultural consultant on Pixar’s “Coco.”

Alcaraz divides his time between Hollywood projects — his comic book “La Cucaracha” is in development as an animated series — and cartoons for outlets such as Andrews McMeel Syndication, Daily Kos and Pocho.com.

The former LA Weekly contributor laments the lack of diversity among American newspaper staff political cartoonists. There are relatively few prominent artists of Latino descent doing editorial cartoons, he says: “We’re too spicy for mainstream newspapers, I guess.” Yet he instead embraces the freedom to be political in his comic: “If I had a personal job, ‘La Cucaracha’ would be more about burrito jokes than war crimes in Ukraine.”

And pressing on multiple fronts, Alcaraz — a virtual artist-in-residence at Arizona State University — aims to inspire the next generation of increasingly diverse creators.

“They don’t have to be a starving artist, and I hope society catches up to that idea,” says Alcaraz, who also illustrated the “Latino USA” book. “I would be happy if they all became screenwriters or wrote graphic novels.

“You can be true to your culture – and you don’t have to water it down for anyone.”

Does requesting a credit limit increase affect your credit score?