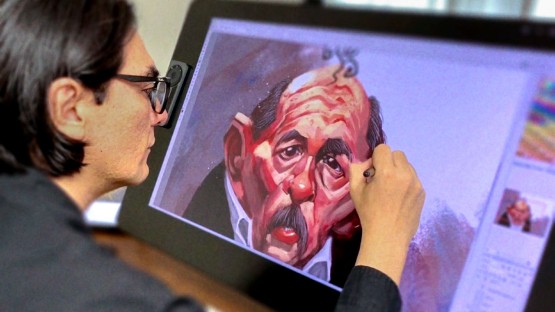 Christmas in Nicaragua is meant to be a time of celebration and family celebration. But for Pedro X. Molina, Christmas 2018 was a crossroads.

“I realized that if I stayed in Nicaragua, two things could happen,” said Molina, a well-known political cartoonist who regularly poked the government of President Daniel Ortega in his cartoons. â€œOne is that I should censor myself and stop talking about what was going on in my country. The second is that they would put me in jail. To ensure that I could continue to do my job, I made the decision to leave.

For years, Molina has received death threats via voicemail and on social media. Yet, working from home in the mountain town of EstelÃ­, Nicaragua, he was able to keep a low profile and continue producing his cartoons – six a week, plus one comic on Sundays.

But in mid-December, when government forces attacked and then occupied the offices of his main media outlet, the weekly Confidencial, he knew he had to flee. For months, the government had severely cracked down on its critics, killing more than 300 people and imprisoning hundreds more. Independent journalists were among the regime’s favorite targets.

On Christmas Day, Molina arrived in Ithaca with his wife and two children, thanks to Ithaca city of asylum (ICOA), an entirely voluntary project of Center for transformative action, a non-profit organization affiliated with Cornell.

The ICOA helped him find accommodation, obtain a visa and get in touch with Ithaca College, where he spent two years as a visiting scholar.

Molina moved to Cornell this fall with the help of a Artists’ protection fund Institute of International Education (IIE) scholarship. IIE-APF places threatened artists in welcoming host institutions in safe countries, where they can continue their work and plan for the future through scholarships, mentoring, and an artistic and social support network.

Molina is now an APF Fellow in Residence and Guest Critic at Cornell’s Latin American and Caribbean Studies Program (LACS), which is part of Mario Einaudi Center for International Studies. He will moderate a hybrid round table with other designers on political resistance through the art of caricature October 28 at 5 p.m.

“This is a great opportunity for our program,” said Ernesto Bassi, director of LACS and associate professor of history at the Faculty of Arts and Sciences of Molina. â€œPedro is not only a very talented political cartoonist, but also a surprisingly sharp social critic. You can see why his cartoons are reaching the Nicaraguan authorities. “

His work was recognized this month by the Gabo Excellence Award 2021, one of the most prestigious journalism awards in Latin America. Molina is the first designer to win the prize, awarded by the foundation created by the late Nobel laureate Gabriel GarcÃ­a MÃ¡rquez.

The judges praised Molina for using humor “to challenge despotic rulers and even tyrannies,” and said the award was intended to “publicly praise – in front of all citizens of the Americas – the social value of journalism that resists abuses of political power on our continent. “

When Molina and her family arrived in Ithaca, with just hand luggage to avoid suspicion, they had only heard of the city a few days before. It was snowing and they were all exhausted. But before Molina collapsed in bed, he pulled out his iPad, drew a cartoon, and sent it to Nicaragua.

“Of all the other things we were feeling at the time, it was great to know that what we were doing had a purpose,” he recalls.

That was almost three years ago. Since then, Molina has sent home a cartoon every day.

At LACS, Molina will give workshops and lectures and interact with professors and students. In the spring, he will give a cartoon class. He also continues to produce cartoons for Confidencial and other publications.

Molina’s placement at Cornell is part of a larger commitment to Cornell Global and the Einaudi Center to partner with international academics rescue organizations to support academics, writers, artists, journalists and human rights defenders whose work puts them at risk in their home countries.

â€œOne of the main priority research areas of the Einaudi Center is democratic threats and resilience“, said the director of Einaudi Rachel Beatty Riedl. â€œBringing academics into our community who are persecuted for what they study – or who they are – is an act of democratic resilience that fosters intellectual pluralism at home and abroad. “

A few weeks after the Taliban took control of Afghanistan in August, Global Cornell announced plans to host three mid-career Afghan academics with support from the IIE Scholarship Rescue Fund. Global Cornell is also working with the Herbert F. Johnson Art Museum at Cornell to host an Afghan artist currently in Iran.

â€œGreat resilience can emerge from a severe threat, and these researchers are leading the way,â€ said Riedl. â€œWe are honored to welcome them and integrate them into our research teams. “

The South East Asia Program currently sponsors a photographer and an opposition politician from Myanmar, both of whom fled after the February 2021 military coup. In January, the Institute for European Studies will host a well-known Russian dissident writer and media personality supported by a scholarship from the Open Society University Network.

In addition, Global Cornell is leading an effort to bring several female Afghan undergraduate students to Ithaca to work as short-term research interns across the university. Eight students are expected in early November.

Molina says he would like to return to Nicaragua, but that’s not an option at the moment. He says he has many plans for his time at Cornell, including “finding a more stable job where I can support my family.”

In the meantime, he refuses to let distance silence him. In addition to his work as a teacher, speaker and freelance writer, he will continue to send daily cartoons home.

Jonathan Miller is a freelance writer based in Ithaca, New York, and a member of the board of directors of Ithaca City Of Asylum.