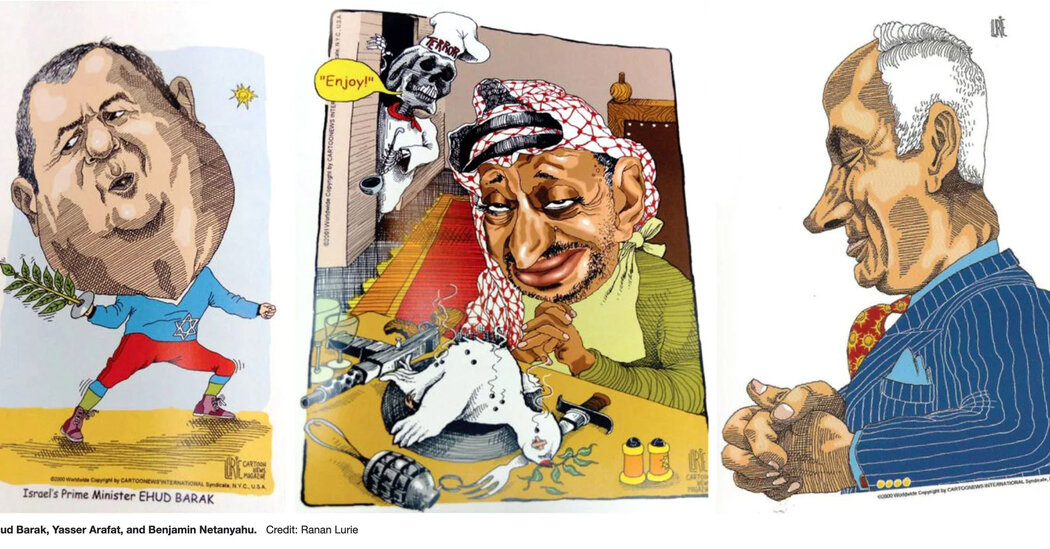 Ranan Lurie, political cartoonist with a global feather, dies at 90

Ranan Lurie, an Israeli war hero and world peacemaker who set records as the world’s most widely circulated political cartoonist, died in Las Vegas on Wednesday. He was 90 years old.

His death, at an assisted living facility, was confirmed by his son Rod Lurie.

At its peak, Mr Lurie’s evocative cartoons appeared in around 1,000 publications with over 100 million readers in 100 countries, setting a benchmark in the Guinness Book of World Records in the 1980s (since surpassed by Johnny Hart, creator from The Wizard of Id and BC).

He fused drawing and writing into an instrument mightier than the sword that gave voice to his deeply held political views and whose imagery, he said, has even more impact than the photography.

“Even though it is the most sophisticated camera in the world,” he told Israeli newspaper Haaretz in 2017, “it will never be able to capture the person more accurately than the artist or the designer who knows how to show his true character”. .”

Other media can convey multiple viewpoints simultaneously, he told The Times in 1989, but political cartooning can only do one, so “when I win”, he said, “I better win with a knockout”.

His first of some 12,000 cartoons was published in the Yedioth Ahronoth newspaper in 1948, when he was 16 and recovering in a hospital from an arm wound inflicted by a grenade during his time with the ‘Irgun, the underground militia demanding that Britain redeem its decades- old promise to sanction a Jewish state.

“Luckily I had a pencil and paper in the hospital, so I drew,” he said. “Also, if I had had a violin there, I might have been a great violinist today.”

In 1968, after working as a cartoonist for The Air Force Journal, an Israeli military publication, and as an illustrator and political cartoonist for Israeli newspapers, he was recruited by Life magazine, originally to deliver a first-person account of his major role in the Arab-Israeli war of 1967.

His work at Life led him to subsequent stints as a political cartoonist with Le Figaro, Paris Match, The Times of London, Die Welt in Germany, Asahi Shimbun in Japan, Newsweek, US News and World Report, Time International, The Wall Street Journal, Foreign Affairs and The New York Times.

Mr. Lurie was founder and editor of Cartoonews, an educational and current affairs magazine; a member of Cartoonists for Peace, an international coalition; and Senior Fellow at the Center for Strategic and International Studies, a Washington-based nonpartisan public policy group.

Mr. Lurie, who had fought in two wars in the Middle East as an Israeli, was nominated for the Nobel Peace Prize in 2002 by Glafcos Clerides, the President of the Republic of Cyprus at the time, for, as he put it, “creating a great spirit of understanding among people of many races”, adding that Mr. Lurie had “helped defuse political and other hot-button disputes all over the world”.

Ranan Raymond Lurie was born on May 26, 1932, in Port Said, Egypt, where his parents had traveled from Tel Aviv so that his mother could give birth to his paternal grandfather, Rabbi Isaiah Lurie, who served as her attendant. major. for the Carmel Mizrahi winery. Two weeks later they returned to Tel Aviv.

His father, Joseph, was an accountant and a sixth-generation member of his Jerusalem-born family. His mother, Shoshana (Shmuelewitz) Lurie, who was seventh generation born in Jerusalem, was an office manager for a utility company.

According to “The Lurie Legacy: The House of Davidic Royal Descent” (2004), by Neil Rosenstein, the family traces their ancestry to the prophet Isaiah, medieval French rabbi Rashi, Felix Mendelssohn and Sigmund Freud. The family had settled in Jerusalem in 1815.

“I’ve always been good at drawing, even when I was 4 years old,” Mr. Lurie told The New York Times in 1995. “It gave me an overwhelming tool and the urge to hold it and develop it.”

A school newspaper printed one of his cartoons when he was 10 years old.

Fussing his age of two, Ranan enlisted in the Irgun at age 14 while still enrolled in school, the Herzliya Gymnasium in the coastal city of Herzliya. He trained to be a fighter pilot, but was fired when he buzzed a beach in Herzliya so close that a lifeguard dived into the water from his paddleboard to avoid the plane. He completed high school while working as a journalist.

In 1954, posing as an Australian journalist while working for the Israel Defense Forces magazine, he made his way onto an Egyptian warship docked in Venice and took detailed photos of the radar technology Soviet classified ship. As a result, at age 22, he became the first recipient of what became the Sokolow Prize, the journalism prize awarded by the Tel Aviv Municipality.

His first full-time job as a cartoonist was with The Air Force Journal. His works from this period were anthologized in 1955 in the first of his books, “Among the Suns”. (Many of his illustrations included a smiling sun icon.)

Among his other books, “The Cartoonist’s Story” (2004), alternately described as a short story and a memoir, in which an Israeli teenager is recruited by the Mossad, the Israeli intelligence agency, and wields his cartoonist’s pen to insinuate with world leaders and other powerful figures.

For a decade from 1957, in his mid-twenties, Mr Lurie was the political cartoonist for Yediot Aharonot, the newspaper which had published his first cartoon when he was a teenager. It has become Israel’s most widely circulated daily.

In 1967, as a major in the Israeli reserves, he exhibited his work in a portrait exhibition at Expo 67 in Montreal when he was recalled to serve in the Six Day War with neighboring Arab nations.

As military governor of Anabta, a town in what is now the West Bank, he said, he personally intervened with Prime Minister Levi Eshkol, with whom he had become friends by then, to stop the order of the army to expel the Palestinian inhabitants of the city towards Jordan.

He told Haaretz in 2017 that he admonished his troops “not to touch an old man, woman or child”.

“One of them asked me what to do if a 12-year-old boy was holding a gun,” Mr Lurie added. “I told him that even if we captured cannibals, we wouldn’t start eating human beings just because that’s what they do.”

After being recruited by Life magazine, he moved to the United States, where he became a naturalized citizen in 1974. His cartoons have been syndicated by King Features, Universal Press, and the New York Times Syndicate. In 1985, he formed his own syndicate, Cartoons International, led by his wife, Tamar (Fletcher) Lurie, a property manager.

Prior to residing in Las Vegas, he lived in Manhattan and Greenwich, Conn. In addition to his son Rod, director and screenwriter, Mr. Lurie is survived by his wife; another son, Barak, who is a lawyer and radio show host; and two daughters, Dr. Daphne Laurie, director psychologist at the Scripps Research Institute in San Diego, and Danielle Lurie, director.

Among Mr. Lurie’s works outside of comics is ‘United Painting’, part of his Fine Art With a Mission project which began in 2005 with a 75-foot-tall, 600-foot installation. feet long of multicolored squares and rectangles on display at the United Nations Headquarters in New York. (The project’s stated mission was “to unite the world under the umbrella of goodwill and mutual respect.”) Additional sections of “United Painting” were later installed on a satellite orbiting Earth; still others were delivered by Sherpas to the summit of Mount Everest.

Those heights were a far cry from where he started when Life originally invited him to the United States to promote his first-person account of the Arab-Israeli War, published in June 1967 as “A Major’s Long Ride to a Short War”. ”

“At that time, in 1968,” he told the Times, “we had no contacts, no network of old boys, hardly any friends or money.

“Everything,” he said, “materialized from my 10 fingers.”