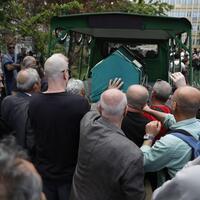 Famous Turkish cartoonist Latife Demirci, who lost his life on June 5 at the age of 61, was buried in Istanbul on June 7, following a funeral service attended by personalities from the world of media and Turkish art.

Demirci, who was known as the “father of many cartoon characters”, drew caricatures on the front page of the daily Hürriyet.

“He was not such a person, such a great loss,” said Ahmet Hakan, editor of the daily Hürriyet, at the funeral held at the Teşvikiye mosque.

“He left so early. What made him different was his powers of observation. He was used to seeing things we couldn’t see,” notes Sedat Ergin, the daily’s former editor.

Born in Istanbul in 1961, Demirci was known for the characters he created, such as “Mr. Press and Mrs. Media”, “Mr. Muhlis” and “Arab Kadri”.

His first cartoon was published in Gırgır magazine in 1975, when he was only 14 years old. After working for “Fırt” magazine, he founded “Hıbır”, another famous magazine in the country, in 1989 with some other cartoonists.

Demirci was the author and artist of 10 comics.

“He was a man who became happy when he drew,” said cartoonist Tan Oral. Demirci’s sister, Nurver Tiyaki, tearfully expressed her feelings, saying, “A part of me is gone, I’m so sorry.”

Ranan Lurie, political cartoonist with a global feather, dies at 90