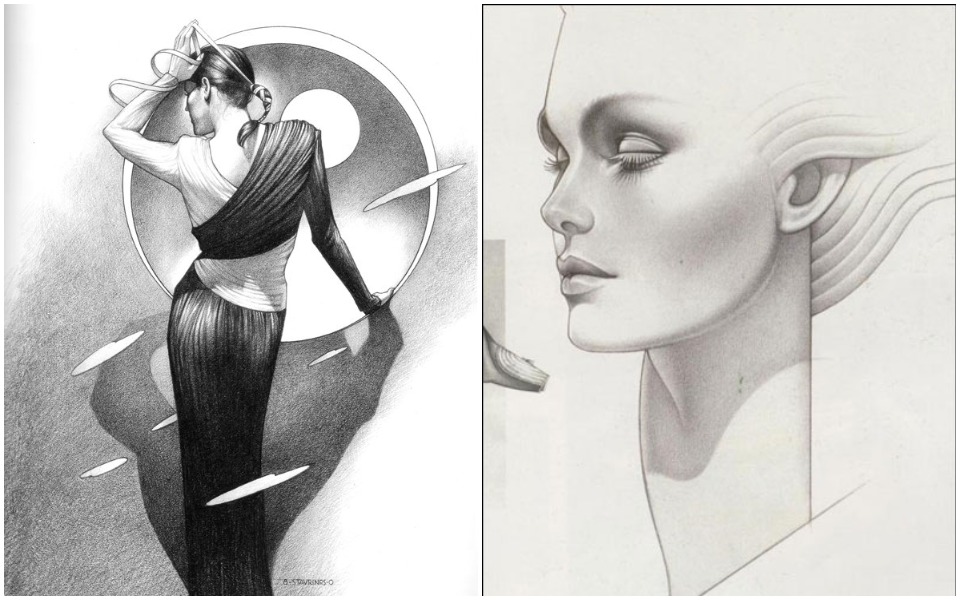 The Greek American who captured the zeitgeist in fashion illustration

Blogger Gina Moyer writes that fashion illustration has the “dexterity to freeze a moment in history through the prism of artistic style, attitudes reflecting the era and the latest fashion trends…” George Stavrinos (1948 -90) did much more than this. With his extraordinary craftsmanship and artistic genius, his work ventures into the fine arts, bringing fashion illustration out of the park.

Bradford Hamann, assistant professor of graphic design at Shepherd University, writes that Stavrinos revolutionized fashion illustration, proving that it could be “imbued with dramatic content, that it could be monumental, and that it could to be considered an “art” in the truest sense of the word. word.”

Stavrinos art is said to belong to super realism, a movement of the late 60s and early 70s in which art approaches the realism of photography. According to Hamann, this involved “such minute detail that he eventually came to use almost exclusively an F mechanical pencil.” His process began with hundreds of photographs of his model in various poses and at different focal lengths using a Polaroid SX-70. He then created an environment around the model that included a variety of shapes and materials, such as pottery, fans, lights, and various geometric patterns. His niece Cynthia Morakis Pursley had the privilege of drawing with her uncle and watching him work. She mainly remembers the time when he placed his model in his bathtub because he liked tiles as a background. Whatever his process, Stavrinos always created “a striking new look which set the tone for his contemporaries and continues to have an influence”. Judging from his work, it is clear that he considered illustration to be true art and that he went out of his way to make it so. His fine details suggest that he hasn’t underestimated his viewers and appreciated their appreciation of his work.

Stavrinos was born in Somerville, Massachusetts to Greek immigrants, who carved out a good life for themselves and their children. Her father ran the Sunrise Diner in South Boston, and her mother, an excellent seamstress, assembled soldiers’ uniforms during WWII. Their story was painful. To escape persecution and possibly death after repeated pogroms by Turkish irregulars and the Turkish army, they fled their homes on the Aegean coast of Asia Minor where the Greeks had lived for thousands of years. His father, Theophilos John Stavrinos, born in the town of Reis Dere near Smyrna, arrived in the United States in 1916 at the age of 16. George’s mother, Asemo Davazoglou, born in Alatsata, also near Smyrna, took her sick sister’s place on the ship to join her brothers, already settled in the Boston area. Both parents survived the 1914 pogrom and massacre in the region. Asemo’s family fled to the Greek island of Chios, with some members eventually coming to America, others settling in Chios, and others still moving to the island of Crete. It was in 1922, when millions of Greeks and Armenians in the region were slaughtered, that the family finally accepted the loss of their homeland, carrying that sense of loss for the rest of their lives.

Their children grew up typically Greek American. Family life revolved around the Dormition of the Virgin Mary Greek Orthodox Church in Somerville, where George served as an altar boy and took Greek language lessons, becoming fluent in Greek. His murals for plays and school competitions still adorn the walls of the church.

Being the youngest of seven children – five sisters and two brothers – with a difference of 21 years from his older sister, George did not suffer from a lack of attention. He was clearly and still is adored by his siblings, nephews and nieces, who miss him and hope to foster appreciation for his work. Surrounded by his art in their homes, George continues to be an important part of their life.

George’s nephew Theo Mitropoulos remembers him as a dedicated artist and a humorous, quick-witted, fun-loving guy with an impeccable taste for movies and restaurants. “My uncle was producing a lot of work every week. But he still had time to throw great parties and enjoy the New York club scene.

George’s skill and passion for drawing became evident as soon as he was able to wield a pencil and brush. Recognizing both his skill and his deep desire to draw, his large family spoiled him and encouraged him to pursue his talent. A Tiffany Foundation Fellow in New York, he studied graphic design at the Rhode Island School of Design, standing out as a star student. Accepted into a specialized program, he also spent a semester in Rome studying architecture and fashion design. From there he traveled to Crete, meeting the side of the family that had settled there, immersing himself in the study and drawing of the architectural elements of the Minoan palace of Knossos. It was here that family became more important to George, who often advised his nieces and nephews on the value of family.

After graduation, George spent time in Boston and Philadelphia, taking on various assignments, before eventually moving to New York City in 1973, creating illustrations for the travel section of The New York Times and its Sunday Magazine. In March 1974, her first fashion article appeared in The Times. As a freelance writer with Pushpin Studios he took on high end clients such as Bonwit Teller, Gentlemen’s Quarterly and Keio Stores in Japan. In 1977 he was hired by Barneys, a men’s fashion store in the process of dropping its low-cost branding and becoming a luxury store.

But as Hamann writes, it was at Bergdorf Goodman that Stavrinos “reached the stratosphere of the fashion world…” creating a compelling and dynamic graphic and brand identity for the iconic luxury retailer specializing in women’s fashion. In 1984, he created a series of character designs for the New York City Opera promotional campaign. It was to be the start of a new era in theater for George, as confirmed by his brother-in-law John Morakis; a new phase cut short by his illness and his premature death at the age of 42 from complications of AIDS.

In addition to fashion, Stavrinos has also designed book covers, most notably for a Gore Vidal mystery series, published under an alias. He has also contributed to LGBT art. His illustrations have been published in numerous gay magazines, including Christopher Street, Blueboy and Gay Source: A Catalog for Men. He has also illustrated the covers of gay poetry and prose books, including Paul Monette’s novel “Taking Care of Mrs Carroll”.

Despite his short life, George has created an astonishing amount of work. His talent and artistic versatility, along with a strong work ethic, has allowed for a prolific pace, a variety of media and a wide range of clients, without compromising the quality of his work or his unique artistic style. His sister Lydia remembers how hard he worked under pressure to meet deadlines. Always aiming high, Stavrinos was inspired by the best, including Norman Rockwell, Maxfield Parrish and JC Leyendecker, three of the most prominent names in American illustration.

In 2007, his talent was posthumously commemorated when he was elected to the Society of Illustrators Hall of Fame. In 2013, the Museum of American Illustration featured his work in “The Vision of George Stavrinos,” an exhibition of over 100 illustrations showcasing his innate artistic ability and successful career.

The publishing world has not given Stavrinos the same kind of recognition, however. This lack of studies and publications may be due to the fact that although George’s work is scattered across various collections, no systematic or extensive public archive is readily available to students, faculty, and independent researchers.

Fortunately, Bradford Hamann’s published thesis, the source of most of the information in this article, provides excellent insight into the life and work of Stavrinos. Plus, countless testimonials across the web from fellow illustrators, friends and students pay homage to George’s spirit and talent, keeping his memory alive.

It is therefore not surprising that 30 years after his death, George Stavrinos continues to be heard, to influence and to inspire, while being adored and missed not only by his biological family, but by a huge family of admirers and fellow illustrators who still consider him one of the best.

Connie Mourtoupalas is curator and former president of the National Hellenic Museum in Chicago.