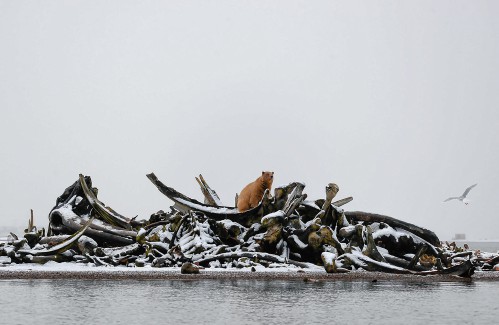 Ed Koren of Brookfield, Vermont, has been drawing cartoons since the 1960s that satirize human failings. In recent years, his meditations have turned to environmental destruction, or “our own form of suicide,” as he calls it. His alarm saturated his work, resulting in a series called “Thinking About Extinction”.

Steve Gorman, from Norwich, has traveled the world to capture the majesty of nature in his photographs. His work took him to Kaktovik, Alaska, a small Inupiat village in the Arctic National Wildlife Refuge, where the battle over whether or not to drill for oil had dragged on for decades. He went to photograph polar bears congregating outside the village and found the majesty of nature degraded.

The intellectual dispositions of the two artists are as far apart as their mediums. For Koren, cartoons start with doodling. He doesn’t offer answers, only thoughts, he said in a phone interview. Gorman’s photographs confront the viewer with the reality of environmental degradation so complete that it extends beyond Alaska’s northern border, the self-declared last frontier. The titles of his photographs — To go past, Monument to Infinite Growth, Limits to growth – encapsulate a worldview: we must stop pursuing unlimited growth on a planet with limited resources, an idea he explained during an interview at the Norwich Public Library.

Yet their artistic works, seen together, complement each other in strange ways.

“Down to the Bone,” an exhibit at the Peabody Essex Museum in Salem, Mass., combines the lost creatures of the New Yorker cartoonist with the animal photographer’s hungry and grimaced polar bears. The curators thoughtfully placed their works side by side, drawing unlikely similarities in their compositions. The gallery is small, with less than 10 works by each artist hanging around the perimeter of the room. A video broadcast in the center of the room allows visitors to listen to interviews with the artists.

At Gorman’s To go past, a lone polar bear stares at the viewer. The monumental bones of a bowhead whale stand behind her. The Inupiat hunted the whale and discarded its carcass after gleaning what they needed to support themselves. But the bones still contain enough flesh for the polar bears to desperately search for food while waiting for the pack ice to form. They can only hunt seals on the ice, but the ice is forming weeks later than in centuries past.

The polar bear, so associated with dazzling white fur and massive strength, is reduced in Gorman’s photograph. His head sinks. The sand and grease of the rotting carcass turn its matted fur yellow. Looking past the camera, he seems to be watching for the ice cream he’s been waiting for but can’t find.

Koren’s cartoon Thinking about extinction II hanging next to the photo. Two four-legged creatures with skeletons for bodies hang suspended among piles of broken bones. The undead seem poised to crumble into more lifeless bones like those around them. Their round, bewildered eyes stare at hairy, grizzled faces. Like polar bears, they are also confused beings, lost in the detritus of a collapsing world.

Both artists are confronted with the same disturbing truth: “It may seem impossible to imagine that a technologically advanced society could choose, in essence, to destroy itself, but that is what we are doing. the new yorker Environmental journalist Elizabeth Kolbert wrote this damning diagnosis of contemporary society at the end of her 2014 book The sixth extinction: an unholy story. The quote is printed on the wall above the artists’ works.

Gorman’s bears and Koren’s creatures stare at the viewer, but they don’t accuse. They are too bewildered by their own fate to take the blame. They stare at the viewer as if asking for answers, but no answers are at hand. Nor do they invite pity – we are too close to finding ourselves in the same misfortune. They are our mirrors.

Serendipity reunited Gorman and Koren after Gorman and his wife, Mary, browsed an exhibit of Koren cartoons at the BigTown Gallery in Rochester, Vermont.

“(Koren) had created these imaginary scenes, but they were so similar…to the scenes I had actually captured with my camera,” Gorman said.

Gorman sent his photographs to Koren.

“I was stunned,” Koren said.

Koren, born in 1935, grew up in New York. The panoramas of the Natural History Museum sum up nature for him. The carefully arranged models seemed inviolable in the sanctity of the museum. He believed that the ecosystems they represented were equally immune to disturbance.

“It was an unchanging nature, a nature that would never change, and was always in harmony with all the ecosystems that were in place at the time,” he said.

Yet climate change, disasters and mass extinctions reveal just how unstable nature can be.

Gorman’s photographs show a much more tumultuous nature than the panoramas that animate Koren’s imagination. Gorman said it was getting harder and harder for him to find a place that didn’t bear the mark of destruction.

The gallery’s series of cartoons are Koren’s meditations on environmental degradation, but they are also a continuation of his much longer body of work.

“What I deal with as a cartoonist is human frailty,” he said. “Suicide is what we do to ourselves.”

Koren is a social satirist, and he captures both tragedy and comedy in the drama of the Anthropocene. In a geological age where humans dominate the environment, our own actions lead to our downfall. At 87, he also knows that he is on the other side of the most terrible consequences of climate change. Although buying an electric vehicle is worth it, it is no match for the scale of the crisis, he said. He has no answers.

Both Koren and Gorman have expressed doubts that artists can make a big difference, but Gorman has clear ideas he wants to advance through his work. He writes a manifesto to accompany his photographs.

“The root of the climate crisis is cultural,” he writes. “Industrial growth capitalism is the modern adaptation of the frontier myth – the belief that there are no limits to nature’s bounty, or its ability to absorb our wastes.”

He looks for places where people live within natural constraints. He chose to photograph the Inupiat because they live so lightly on the land that they have sustained themselves for millennia. He presents them as models, and proofs, of an alternative path to endless overconsumption.

‘Down to the Bone: Edward Koren and Stephen Gorman’ is on view at the Peabody Essex Museum until February 5, 2023. The exhibition is part of the museum’s Climate + Environment initiative, which features artwork that engage in our changing relationship with the natural world. Admission is $20 for adults; $18 for seniors; and $12 for students.